On Saturdays 6 p.m. you are invited to make the acquaintance of bridge, which is considered to be the most intellectual card game in the world.

Probably many of you have not ever heard about this game, or heard a little. Bridge is not only the most intellectual card game in the world. This game is even superior than chess because of the number of possible combinations. Bridge is played in Olympic Games as well. This game could be amateurish and sportive, which aim is to win. The aim of sportive bridge is to win, while amateurish bridge aims at communication and stimulation of analytical thinking.

Here are some instructions of bridge. Players are divided into pairs, and the aim of this game is to make tricks during the contest. The task of one player is to find out what cards does his partner have, and to do that with making „posters“ and this helps to announce a deal. In the time of playing, opponents are construing by themselves, players also try to guess what cards do their opponents have. When the initial information is getting, the deal is announced when the initial information is received.

One of the partners opens his cards, then the deal is whisting, this means that the speaking pair tries to get as much „accents“, as they can „order“, and the opponents try to disturb that.

All the image is made up of the previous announcements of the cards.

This game is not very popular in Lithuania, however, it unites bridge‘s enthusiasts in Vilnius, Kaunas and Šiauliai. When you play bridge for a long time, other card games become very simple. All the skills gained while playing bridge are useful because this game helps to control yourself.

Got interested? Thus join us on Saturdays 6 p. m. and learn how to play it. 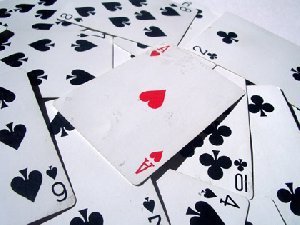