“Verslo Angelas” – organization of the year

Organizations which came had to take up many challenges. The
first challenge was rope pulling competition, also – water carrying on very
unstable logs. Although the first three challenges were very hard, all the
organizations were friendly and waited for the final match.

After the sport competition, the teams waited for the
creative challenge. All teams got materials like onetime plates, onetime forks,
cups, 2 blanks of paper, pens and some duck tape. From these materials they had
to make an egg catcher. The egg had to fall into the egg catcher: the egg
couldn’t brake and the egg catcher can’t fall apart. Only two teams won this
challenge – “Baltų Ainiai”
and Verslo Angelas”!

After this challenge there was left only one challenge –
karaoke singing. This competition was judged by the “Alytaus Liberalaus
Jaunimo” organization members. With a good mood and thoughts of wining the
teams waited for the time when they will know which organization will be the
best. 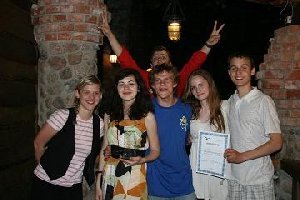