During the days of August 20-21, “We Know the Way” toke place for the 7-th time. Like every year there was rafting in Nemunas, evening discussion, which main topic was youth emigration from Alytus.

On the first day the youth gathered in “Verslo Angelas”, they divided into groups with different aims and started work. There were six groups: business men, self-government, students, emigrants, culture and politics. Everyone could have chosen the group they like. In each group there was a discussion how to stop the youth emigration. After a short discussion all the members traveled to the camp – Nemunaitis. The discussion continued in the camp with politics, business men and culture representers which valuated the youth ideas how to stop emigration.

The discussion members came to conclusion that the biggest problems which encourage emigration are: lack of collaboration with youth organizations, lack of business men, small businesses disunity, lack of universities and specialities, shortness of culture, disappointment of local government, lack of entertainment, jobs and etc. Project members came to conclusion that youth should collaborate more with each other, realize more ideas.

This year the project “We Know The Way” broth many new ideas which inspired to create a more beautiful future for Alytus and stop the youth emigration. We hope that this project will give real results and will be continued next year. 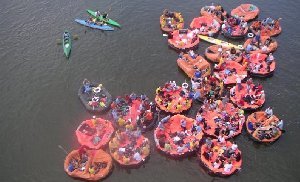